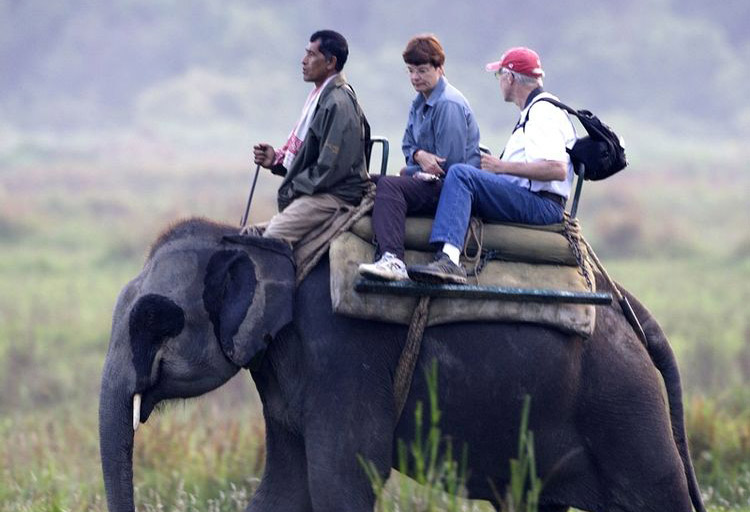 Assam has enjoyed a reputation for unspoiled natural beauty, substantial biodiversity, tea plantations, and friendly people. The Brahmaputra, the lifeline of the valley which shares its name, floods the nearby land with fertile silt every year to ensure a rich harvest. It is bound on either side by marshy land covered with thick jungle grass, interspersed with patches of rice fields and terraced tea gardens. There is little to interrupt the vast panorama except the occasional lone hillock. Only in the south of the valley is the even horizon broken by the hills of Karbi Anglong. Further south are the North Cachar Hills. Located here, amid orchards is Assam's only hill station, Haflong. The southern part of Assam is the Barak Valley, this region hosts untouched natural beauty. Green is the dominant colour of the state, with an impressive 35% forest cover and thousands of hectares under tea cultivation. Assam has five national parks including the World Heritage Sites of Kaziranga and Manas, and 20 Wildlife and Bird Sanctuaries. The great Indian one-horned rhinoceros is one of Assam's most noteworthy fauna.

Meghalaya, along with neighboring Indian states, have been of archeological interest. People have lived here since neolithic era. Neolithic sites discovered so far are located in areas of high elevation such as in Khasi Hills, Garo Hills and neighboring states. Here neolithic style jhum or shifting cultivation is practiced even today. The highland plateaus fed by abundant rains provided safety from floods and a rich soil. The importance of Meghalaya is its possible role in human history through domestication of rice. One of the competing theories for the origin of rice, is from Ian Glover, who states, "India is the center of greatest diversity of domesticated rice with over 20,000 identified species and Northeast India is the most favorable single area of the origin of domesticated rice." The limited archeology done in the hills of Meghalaya suggest human settlement since ancient times 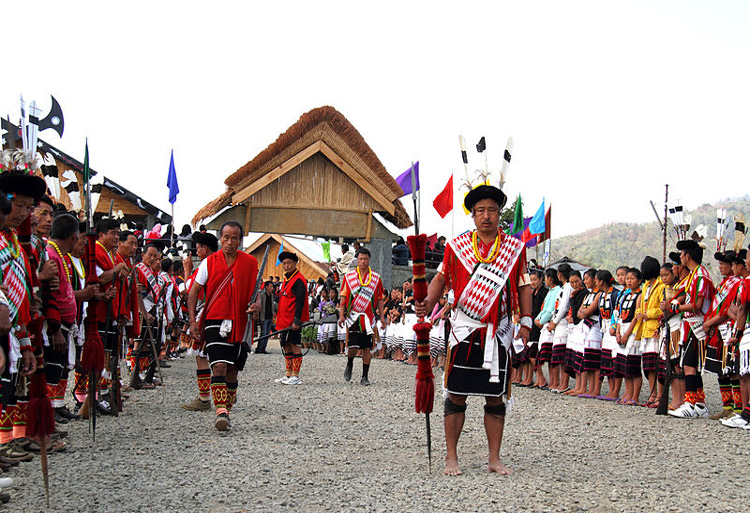 Nagaland is a state in Northeast India. It borders the state of Assam to the west, Arunachal Pradesh and part of Assam to the north, Burma to the east and Manipur to the south. The state capital is Kohima, and the largest city is Dimapur. It has an area of 16,579 square kilometres (6,401 sq mi) with a population of 1,980,602 per the 2011 Census of India, making it one of the smallest states of India. The state is inhabited by 16 major tribes - Ao, Angami, Chang, Konyak, Lotha, Sumi, Chakhesang, Khiamniungan, Dimasa Kachari, Phom, Rengma, Sangtam, Yimchunger,Kuki, Zeme-Liangmai (Zeliang) and Pochury as well as a number of sub-tribes. Each tribe is unique in character with its own distinct customs, language and dress. Two threads common to all, are language and religion - English is in predominant use. Nagaland is one of three states in India where the population is mostly Christian. 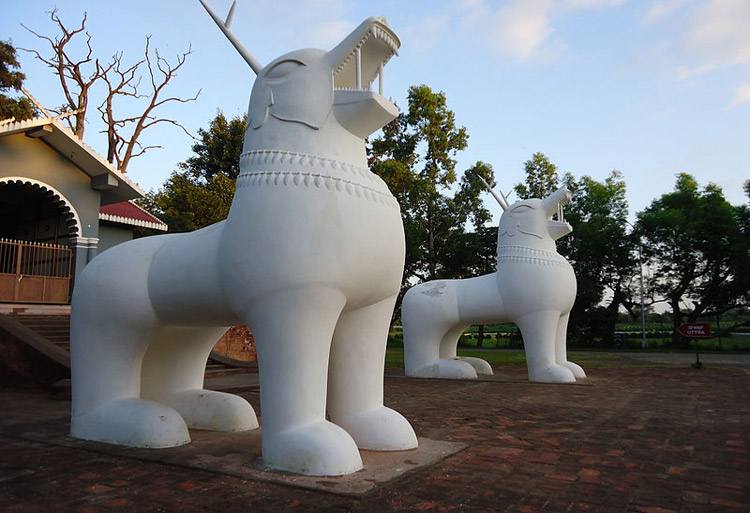 Manipur is a state in northeastern India, with the city of Imphal as its capital. Manipur is sometimes called alternative names such as Kangleipak or Sanaleibak. It is bounded by Nagaland to the north, Mizoram to the south, and Assam to the west; Burma lies to its east. The state covers an area of 22,327 square kilometres (8,621 sq mi). Its people include the Meetei, Kuki, Naga, and Pangal peoples, who speak Sino-Tibetan languages. Manipur has been at the crossroads of Asian economic and cultural exchange for more than 2,500 years. It has long connected the Indian subcontinent to Southeast Asia, enabling migration of people, cultures and religions.Manipur has primarily an agrarian economy, with significant hydroelectric power generation potential. It is connected to other areas by daily flights through Imphal airport, the second largest in northeastern India. Manipur is credited with introducing polo to Europeans. 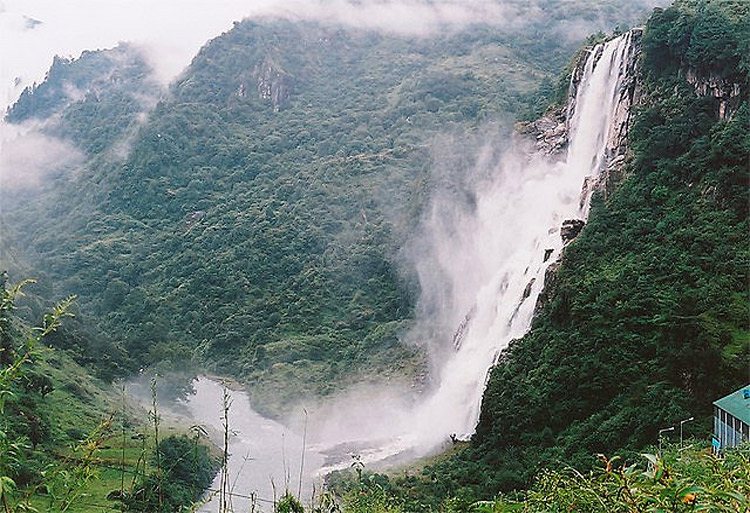 Arunachal Pradesh is one of the twenty-nine states of the Republic of India. Located in northeast India, it holds the most north-eastern position among the states in the north-east region of India. Arunachal Pradesh borders the states of Assam and Nagaland to the south, and shares international borders with Bhutan in the west, Burma in the east and China in the north. Itanagar is the capital of the state. Arunachal Pradesh holds territorial dispute with both the PRC and ROC due to its cultural, ethnic and geographic proximity to Tibet as opposed to India. Arunachal Pradesh, whose name means Land of the Dawn-Lit Mountains in Sanskrit, is also known as the Orchid State of India or the Paradise of the Botanists. Geographically, it is the largest among the North-east Indian states commonly known as the Seven Sister States. As in other parts of Northeast India, the people native to the state trace their origins to the Tibeto-Burman people. In recent times, large number of migrants from various parts of India and other lands have built extensive economic and cultural ties with the state's population. 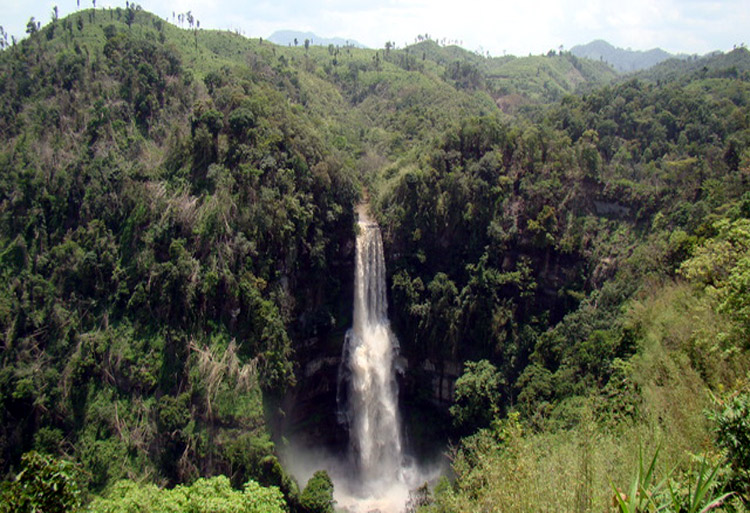 Mizoram is one of the states of Northeast India, with Aizawl as its capital city. The name is derived from Mi (people), Zo (Belonging to the people of Mizoram/Lushai Hills) and Ram (land), and thus Mizoram implies "land of the hill people".[4] In the northeast, it is the southern most landlocked state sharing borders with three of the Seven, now with the addition of (Sikkim,) Eight sister states, namely Tripura, Assam, Manipur. The state also shares a 722 kilometer border with the neighbouring countries of Bangladesh and Myanmar. Like several other northeastern states of India, Mizoram was previously part of Assam until 1972, when it was carved out as a Union Territory. It became the 23rd state of India, a step above Union Territory, on 20 February 1987. Mizoram is a highly literate agrarian economy, but suffers from slash-and-burn jhum or shifting cultivation, and poor crop yields. In recent years, the jhum farming practices are steadily being replaced with a significant horticulture and bamboo products industry. The state's gross state domestic product for 2012 was estimated at ₹6,991 crore (US$1.0 billion). 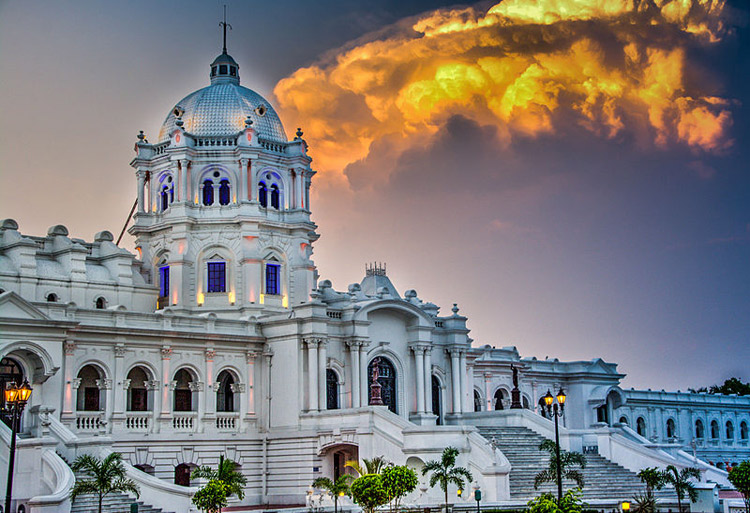 Tripura is a state in Northeast India. The third-smallest state in the country, it covers 10,491 km2 and is bordered by Bangladesh to the north, south, and west, and the Indian states of Assam and Mizoram to the east. In 2011 the state had 3,671,032 residents, constituting 0.3% of the country's population. The Bengali Hindu people form the ethno-linguistic majority in Tripura. Indigenous communities, known in India as scheduled tribes, form about 30 per cent of Tripura's population. The Kokborok speaking Tripuri people are the major group among 19 tribes and many subtribes. The area of modern 'Tripura' was ruled for several centuries by the Tripuri dynasty. It was the independent princely state of the Tripuri Kingdom under the protectorate of the British Empire which was known as Hill Tippera while the area annexed and ruled directly by British India was known as Tippera District . The independent Tripuri Kingdom joined the newly independent India in 1949. Ethnic strife between the indigenous Tripuri people and the migrant Bengali population due to large influx of Bengali Hindu refugees and settlers from Bangladesh led to tension and scattered violence since its integration into the country of India, but the establishment of an autonomous tribal administrative agency and other strategies have led to peace.